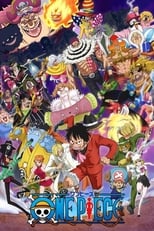 CastMayumi Tanaka, Tony Beck, Laurent Vernin, Akemi OkamuraNetwork Fuji TV Air Date Oct 20th, 1999 Years ago, the fearsome pirate king Gol D. Roger was executed, leaving a huge pile of treasure and the famous "One Piece" behind. Whoever claims the "One Piece" will be named the new pirate king. Monkey D. Luffy, a boy who consumed one of the "Devil's Fruits", has it in his head that he'll follow in the footsteps of his idol, the pirate Shanks, and find the One Piece. It helps, of course, that his...

Where can you stream One Piece?