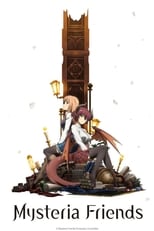 CreatorHideki OkamotoCastYouko Hikasa, Ayaka Fukuhara & Network Tokyo MX Air Date Jan 21st, 2019 The anime will adapt the "Manaria Mahou Gakuin" event within the Rage of Bahamut social game. It will follow the two young women Anne, the honor student princess, and Grea, a princess born from a dragon and a human as students at the academy. Mysteria Academy is a prestigious magic school that teaches magic without discrimination to the three factions (men, gods, demons), who usually are engaged...

Where can you stream Mysteria Friends? DVD/Bluray via Amazon