M – A City Hunts a Murderer 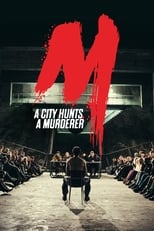 CreatorDavid SchalkoNetwork ORF Air Date Feb 17th, 2019 Winter in Vienna. Children disappear. For now without a trace, then their bodies are found. A gift for the tabloid press. For the police a series of defeats. Politically a problem. And at the same time the long-awaited opportunity for the ambitious interior minister. The organized crime is in trouble. The child murderer must be found so that all other dirty jobs can go on.

Where can you stream M – A City Hunts a Murderer? DVD/Bluray via Amazon