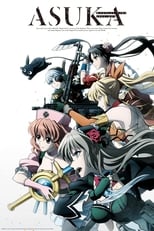 CastEriko Matsui, Akira Sekine & Aya SuzakiNetwork Air Date Jan 11th, 2019 Due to the invasion of Disas—enigmatic creatures of soil from the land of the dead—mankind, who was on the verge of crisis, was saved by the efforts of magical girls who had obtained a mysterious magical power...

Three years later, new incidents suddenly occur, tearing apart the normalcy of the girls who had each returned to their normal lives. The saviours of humanity, those...

Where can you stream Magical Girl Spec-Ops Asuka?