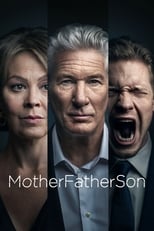 CreatorTom Rob SmithCastRichard Gere, Helen McCrory & Billy HowleNetwork BBC Two Air Date Mar 6th, 2019 Max is a charismatic self-made American businessman with media outlets in London and around the world. When the self-destructive lifestyle of his 30 year-old son, Caden, spirals out of control, the devastating consequences threaten the future of the family, its empire, and a country on the brink of change.

Where can you stream MotherFatherSon? DVD/Bluray via Amazon