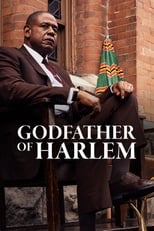 CreatorChris BrancatoCastForest Whitaker, Vincent D'Onofrio & Giancarlo EspositoNetwork Epix Air Date Sep 29th, 2019 The true story of infamous crime boss Bumpy Johnson, who in the early 1960s returned from ten years in prison to find the neighborhood he once ruled in shambles. With the streets controlled by the Italian mob, Bumpy must take on the Genovese crime family to regain control.

Where can you stream Godfather of Harlem? DVD/Bluray via Amazon

On 2019-09-29 Drama/Crime TV Series Godfather of Harlem first aired on Epix. Written and created by Chris Brancato & Paul Eckstein, and produced by ABC Signature & Significant Productions, Godfather of Harlem will return and was last broadcasted on 2019-12-01.
IMDb Rating: /10 Godfather of Harlem Official page on EpixAll Seasons: 1 All Episodes: 10 Average Episode length: 56 minutes Seasons Season 1 - 2019-09-29 with 10 Episodes
The Rook
The Loudest Voice in the Room
We use cookies to ensure that we give you the best experience on our website. If you continue to use this site we will assume that you are happy with it.Ok