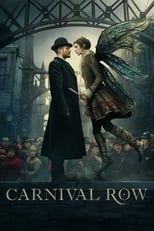 CastN/ANetwork Amazon Air Date Aug 30th, 2019 In a mystical and dark city filled with humans, fairies and other creatures, a police detective investigates a series of gruesome murders leveled against the fairy population. During his investigation, the detective becomes the prime suspect and must find the real killer to clear his name.

Where can you stream Carnival Row? DVD/Bluray via Amazon

On 2019-08-29 Sci-Fi & Fantasy TV Series Carnival Row first aired on Amazon. Written and created by , and produced by Amazon Studios & Legendary Television, Carnival Row will return and was last broadcasted on 2019-08-29.
IMDb Rating: 7.9/10 Carnival Row Official page on AmazonAll Seasons: 1 All Episodes: 8 Average Episode length: 52 minutes Seasons Season 1 - 2019-08-29 with 8 Episodes
Black Summer
The Witcher
We use cookies to ensure that we give you the best experience on our website. If you continue to use this site we will assume that you are happy with it.Ok