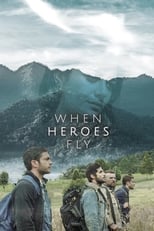 CreatorOmri GivonCastTomer Kapon, Moshe Ashkenazi & Michael AloniNetwork Keshet 12 Air Date May 13th, 2018 Eleven years after falling out, four friends, war veterans of a Special Forces unit, reunite for one final mission: to find Yaeli, a former lover of one of them and sister of another. Their journey will take them deep into the Colombian jungle but, as to succeed, first they must confront the trauma that tore them apart.

Where can you stream When Heroes Fly?