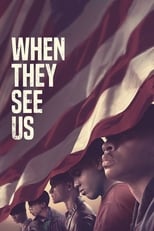 CreatorAva DuVernayCastMichael Kenneth Williams, Vera Farmiga & John LeguizamoNetwork Netflix Air Date Dec 31st, 2019 This docuseries exposes the breakdown of the U.S. criminal justice system during the Central Park Five case where five teenagers of color were convicted of a rape they did not commit.

Where can you stream The Central Park Five? DVD/Bluray via Amazon

On 2019-05-31 Drama TV Series The Central Park Five first aired on Netflix. Written and created by Ava DuVernay, and produced by Participant Media & Harpo Films, The Central Park Five has ended and last broadcasted on 2019-05-31.
IMDb Rating: /10 The Central Park Five Official page on NetflixAll Seasons: 1 All Episodes: 4 Average Episode length: 75 minutes Seasons Season 1 - 2019-05-31 with 4 Episodes
Russian Doll
America’s Got Talent: The Champions
We use cookies to ensure that we give you the best experience on our website. If you continue to use this site we will assume that you are happy with it.Ok