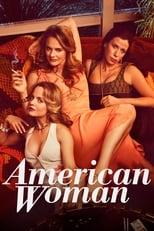 CreatorJohn RiggiCastAlicia Silverstone, Mena Suvari & Jennifer BartelsNetwork Paramount Network Air Date Jun 7th, 2018 This 1970s period dramedy inspired by the real life Kyle Richards and set amid the sexual revolution and the rise of second-wave feminism follows Bonnie, an unconventional mother struggling to raise her two daughters after leaving her husband. With the help of her two best friends, Kathleen and Diana, these three women will each discover their own brand of independence in a world reluctant to give...

Where can you stream American Woman?