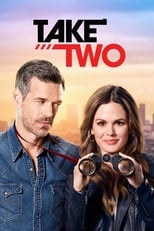 CreatorAndrew W. MarloweCastRachel Bilson, Eddie Cibrian, Xavier de Guzman, Alice LeeNetwork ABC Air Date Jun 21st, 2018 Sam Swift, the former star of a hit cop series whose epic breakdown is broadcast to the public and sends her to rehab. Desperate to restart her career, she talks her way into shadowing lone-wolf private investigator Eddie Valetik as research for a potential comeback role. Though Eddie resents the babysitting gig, high-spirited Sam uses the skills she learned as an actor playing a cop and proves...

Where can you stream Take Two?

On 2018-06-21 Drama/Comedy TV Series Take Two first aired on ABC. Written and created by Andrew W. Marlowe & Terri Edda Miller, and produced by ABC Studios & Tandem Communications, .
IMDb Rating: 7.2/10 Take Two Official page on ABCAll Seasons: 1 All Episodes: 13 Average Episode length: 42 minutes Seasons Season 1 - 2018-06-21 with 13 Episodes
The Dragon Prince
A Million Little Things
We use cookies to ensure that we give you the best experience on our website. If you continue to use this site we will assume that you are happy with it.Ok