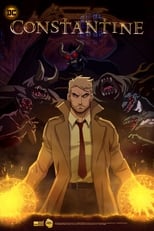 CreatorJ. M. DeMatteisCastMatt Ryan, Damian O'Hare, Laura Bailey, Emily O'BrienNetwork CW seed Air Date Mar 24th, 2018 Armed with an arcane knowledge of the dark arts and a wicked wit, John Constantine fights the good fight. With his soul already damned to hell, he’ll do whatever it takes to protect the innocent. With the balance of good and evil on the line, Constantine uses his skills to face the supernatural terrors that threaten our world and send them back where they belong. After that, who knows…maybe...

Where can you stream Constantine: City of Demons? DVD/Bluray via Amazon

Netflix
Stay up to date with the steaming options of Constantine: City of Demons & other streaming releases