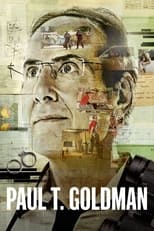 CreatorJason WolinerCastPaul T. Goldman, & Network Peacock Air Date Jan 1st, 2023 Paul T. Goldman's world is turned upside down when he finds out that his wife has been living a secret double life. His efforts to uncover the truth thrust him into a labyrinth of fraud, deception and criminality that transforms him, in his words, "from wimp to warrior." Director Jason Woliner tries to keep the series he thought he was making from going off the rails as Goldman stars in...

Where can you stream Paul T. Goldman? DVD/Bluray via Amazon

Netflix
Stay up to date with the streaming options of Paul T. Goldman & other streaming releases