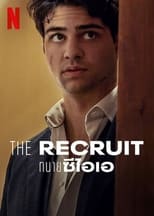 CreatorAlexi HawleyCastNoah Centineo, Daniel Quincy Annoh & Kristian BruunNetwork Netflix Air Date Dec 16th, 2022 A fledgling lawyer at the CIA that becomes enmeshed in dangerous international power politics when a former asset threatens to expose the nature of her long-term relationship with the agency unless they exonerate her of a serious crime.

Where can you stream The Recruit? DVD/Bluray via Amazon