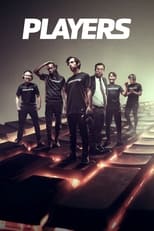 CreatorTony YacendaCastMisha Brooks, Da'Jour Jones & Ely HenryNetwork Paramount+ Air Date Jun 16th, 2022 A pro League of Legends esports team pursues their first championship after years of close calls and heartache. To win it all, they will need their prodigy, a 17-year-old rookie, and their 27-year-old veteran to put their egos aside and work together.

Where can you stream Players? DVD/Bluray via Amazon