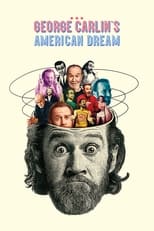 CastGeorge Carlin, Bette Midler & Patton OswaltNetwork HBO Air Date May 20th, 2022 This two-part documentary chronicles the life and work of the legendary comedian, tracking George Carlin’s rise to fame and opens an intimate window into Carlin’s personal life, including his childhood in New York City, his long struggle with drugs that took its toll on his health, his brushes with the law, his loving relationship with Brenda, his wife of 36 years, and his second marriage to...

Where can you stream George Carlin’s American Dream? DVD/Bluray via Amazon