The Newscast with Wolf Blitzer 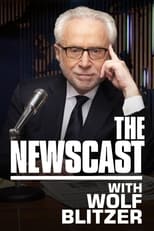 CastWolf Blitzer, & Network CNN+ Air Date Mar 29th, 2022 CNN Anchor Wolf Blitzer gives it to you straight, hitting the headlines you need to know on this traditional evening newscast with a sleek, modern twist. The old-school nostalgic approach featuring original reporting from around the world, investigations and consumer focused stories that matter helps put the latest headlines in perspective.

Where can you stream The Newscast with Wolf Blitzer? DVD/Bluray via Amazon