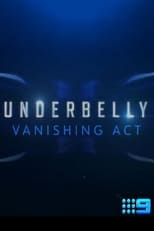 CastKate Atkinson, Georgie Gardner & Sophie BloomNetwork Nine Network Air Date Apr 3rd, 2022 The story of a woman who disappeared after swindling over $40 million from her most trusted clients. This is the story of Melissa Caddick.

Where can you stream Underbelly: Vanishing Act? DVD/Bluray via Amazon

Netflix
Stay up to date with the streaming options of Underbelly: Vanishing Act & other streaming releases