Son of a Critch 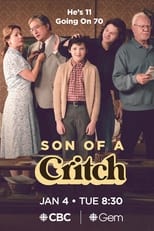 Where can you stream Son of a Critch? DVD/Bluray via Amazon