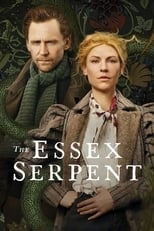 CreatorAnna SymonCastClaire Danes, Tom Hiddleston & Frank DillaneNetwork Apple TV+ Air Date May 13th, 2022 Newly widowed Cora, having being released from an abusive marriage, relocates from Victorian London to the small village of Aldwinter in Essex, intrigued by a local superstition that a mythical creature known as the Essex Serpent has returned to the area.

Where can you stream The Essex Serpent? DVD/Bluray via Amazon