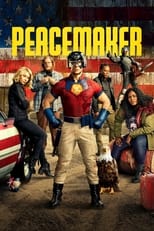 CreatorJames GunnCastJohn Cena, Steve Agee & Danielle BrooksNetwork HBO Max Air Date Jan 13th, 2022 The continuing story of Peacemaker – a compellingly vainglorious man who believes in peace at any cost, no matter how many people he has to kill to get it – in the aftermath of the events of “The Suicide Squad.”

Where can you stream Peacemaker? DVD/Bluray via Amazon