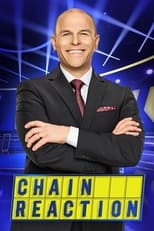 The show aired three separate runs: Bill Cullen hosted the original series on NBC from January 14 to June 20, 1980. The second version aired on the USA Network from September 29, 1986 to December 27, 1991 and was hosted first by Blake Emmons and later...

Where can you stream Chain Reaction? DVD/Bluray via Amazon