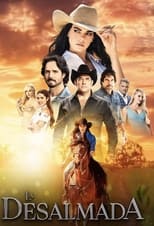 CreatorXimena SuárezCastLivia Brito Pestana, José Ron & Kimberly Dos RamosNetwork Las Estrellas Air Date Jul 5th, 2021 Fernanda Linares (Livia Brito) is a woman thirsty for revenge after the murder of her husband on their wedding night, where in addition, Fernanda was a victim of rape after the event occurred. However, Fernanda's life will change when she meets Rafael Toscano (José Ron), a handsome young man who recently just received his university degree with whom she will empathize and return to Fernanda the...

Where can you stream La desalmada? DVD/Bluray via Amazon