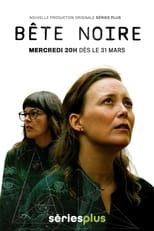 CastIsabelle Blais, Sophie Cadieux & Zakary AuclairNetwork Séries+ Air Date Mar 31st, 2021 Bête noire the collateral effects of an unforgivable act commited by Jérémy, a 16 year-old teenager. With the help of the psychiatrist-coroner in charge of the investigation, his mother tries to understand how her son, a seemingly normal boy, could commit such a heinous act. What caused this nightmare? When did everything change? Together, the two women try to solve the mystery of Jérémy.

Where can you stream Bête noire? DVD/Bluray via Amazon