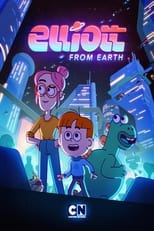 CreatorMic GravesCastSamuel Faraci, Noah Kaye Bentley & Naomi McDonaldNetwork Cartoon Network Air Date Mar 29th, 2021 An animated sci-fi comedy about a boy and his mum who find themselves suddenly transported somewhere across the universe surrounded by an amazing array of aliens from new and unknown corners of the galaxy. While trying to work out who brought them there and why, they make a new home for themselves and encounter new friends, including Mo, the only other being from Earth – a dinosaur.

Where can you stream Elliott from Earth? DVD/Bluray via Amazon