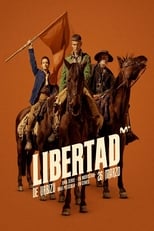 CreatorMichel GaztambideCastBebe, Isak Férriz & Xavier DeiveNetwork #0 Air Date Mar 26th, 2021 Set in the 19th century, the series tracks a mother and her son following their release after spending the first seventeen years of the boy’s life in prison together. Having been granted their freedom, the two just want to live in peace. Unfortunately, they find themselves between conflicting interests of two bandit clans and the local governor, fighting over trade routes.

Where can you stream Libertad? DVD/Bluray via Amazon