We Children from Bahnhof Zoo 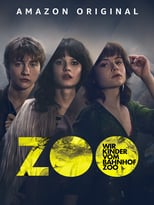 CreatorAnnette HessCastJana McKinnon, Lena Urzendowsky & Lea DrindaNetwork Amazon Air Date Feb 19th, 2021 The series follows six teenagers who fight for their dream of happiness and freedom, leaving behind all the problems with parents, teachers and others. Christiane, Stella, Babsi, Benno, Axel and Michi throw themselves into the heady nights of Berlin, without limits or rules, and celebrate life, love and temptation - until they have to realize that this rush will not only destroy their friendship,...

Where can you stream We Children from Bahnhof Zoo? DVD/Bluray via Amazon

On 2021-02-19 Drama TV Series We Children from Bahnhof Zoo first aired on Amazon. Written and created by Annette Hess, and produced by Constantin Television & Amazon Studios, We Children from Bahnhof Zoo will return and was last broadcasted on 2021-02-19.
IMDb Rating: N/A/10 All Seasons: 1 All Episodes: 8 Average Episode length: minutes Seasons Season 1 - 2021-02-19 with 8 Episodes
Mijn Slechtste Beste Vriendin
Go Dog Go
We use cookies to ensure that we give you the best experience on our website. If you continue to use this site we will assume that you are happy with it.Ok