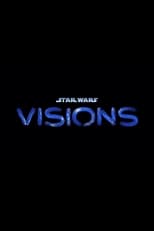 Where can you stream Star Wars: Visions? DVD/Bluray via Amazon

Netflix
Stay up to date with the streaming options of Star Wars: Visions & other streaming releases