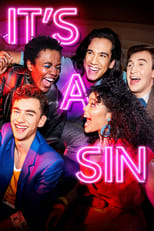 CreatorRussell T DaviesCastNathaniel Curtis, Omari Douglas, Callum Scott Howells, Lydia WestNetwork Channel 4 Air Date Jan 22nd, 2021 A chronicle of four friends during a decade in which everything changed, including the rise of AIDS.

Where can you stream It’s A Sin? DVD/Bluray via Amazon

On 2021-01-22 Comedy/Drama TV Series It’s A Sin first aired on Channel 4. Written and created by Russell T Davies, and produced by Red Production Company, It’s A Sin will return.
IMDb Rating: N/A/10 All Seasons: 1 All Episodes: 5 Average Episode length: minutes Seasons Season 1 - 2021-01-22 with 5 Episodes
This is Going to Hurt
We use cookies to ensure that we give you the best experience on our website. If you continue to use this site we will assume that you are happy with it.Ok