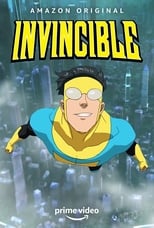 CreatorRobert KirkmanCastJ.K. Simmons, Steven Yeun & Zazie BeetzNetwork Amazon Air Date TBA Animated series based on the Skybound/Image comic about a teenager whose father is the most powerful superhero on the planet.

Where can you stream Invincible? DVD/Bluray via Amazon

On Animation/Action & Adventure TV Series Invincible first aired on Amazon. Written and created by Robert Kirkman & Cory Walker, and produced by Skybound Entertainment, .
IMDb Rating: /10 All Seasons: 1 All Episodes: 1 Average Episode length: minutes Seasons
Vikings: Valhalla
The Last of Us
We use cookies to ensure that we give you the best experience on our website. If you continue to use this site we will assume that you are happy with it.Ok