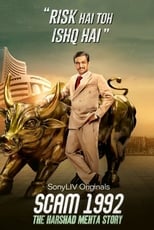 Where can you stream Scam 1992 – The Harshad Mehta Story? DVD/Bluray via Amazon