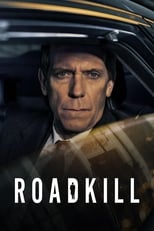 CreatorDavid HareCastHugh Laurie, Helen McCrory & Pippa Bennett-WarnerNetwork BBC One Air Date Oct 18th, 2020 Politician Peter Laurence's private life is falling apart. Shamelessly untroubled by guilt or remorse, he seeks to further his own agenda whilst others plot to bring him down. Can he out-run his own secrets to win the ultimate prize?

Where can you stream Roadkill?