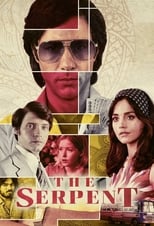 CreatorRichard WarlowCastTahar Rahim, Jenna Coleman & Ellie BamberNetwork BBC One Air Date Jan 1st, 2021 The remarkable story of how murderer Charles Sobhraj was captured. As the chief suspect in unsolved murders of young Western travellers across India, Thailand and Nepal’s ‘Hippie Trail’ in 1975 and 1976, Sobhraj had repeatedly slipped from the grasp of authorities worldwide to become Interpol's most wanted man, with arrest warrants on three different continents.

Where can you stream The Serpent? DVD/Bluray via Amazon

On 2021-01-01 Drama/Crime TV Series The Serpent first aired on BBC One. Written and created by Richard Warlow & Toby Finlay, and produced by Mammoth Screen & ITV Studios, The Serpent will return and was last broadcasted on 2021-01-17.
IMDb Rating: /10 The Serpent Official page on BBC OneAll Seasons: 1 All Episodes: 8 Average Episode length: 58 minutes Seasons Season 1 - 2021-01-01 with 8 Episodes
Física o química: El reencuentro
Strafrechters
We use cookies to ensure that we give you the best experience on our website. If you continue to use this site we will assume that you are happy with it.Ok