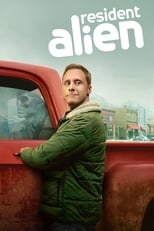 CreatorChris SheridanCastAlan Tudyk, Sara Tomko & Corey ReynoldsNetwork Syfy Air Date Jan 27th, 2021 A crash-landed alien takes on the identity of a small-town Colorado doctor. As he integrates into the human world, he slowly begins to wrestle with the moral dilemma of his secret mission on Earth while dealing with a 9-year old boy who can see his true alien form.

Where can you stream Resident Alien? DVD/Bluray via Amazon

On 2021-01-27 Sci-Fi & Fantasy TV Series Resident Alien first aired on Syfy. Written and created by Chris Sheridan, and produced by UCP, Resident Alien will return.
IMDb Rating: /10 Resident Alien Official page on SyfyAll Seasons: 1 All Episodes: 5 Average Episode length: minutes Seasons Season 1 - 2021-01-27 with 5 Episodes
Celebrity Wheel of Fortune
The Dark: Forever Winter
We use cookies to ensure that we give you the best experience on our website. If you continue to use this site we will assume that you are happy with it.Ok