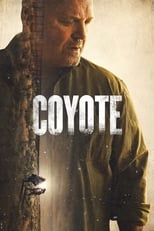 CreatorMichael CarnesCastMichael Chiklis, Juan Pablo Raba & Adriana PazNetwork CBS All Access Air Date Jan 7th, 2021 On the day of his mandatory retirement from the United States Border Patrol, Agent Ben Clemens discovers an illicit tunnel used to mainline black market goods into the United States from Mexico which soon puts him in the crosshairs of the criminal mastermind he’s spent his career trying to destroy.

Where can you stream Coyote? DVD/Bluray via Amazon

On 2021-01-07 Drama/Crime TV Series Coyote first aired on CBS All Access. Written and created by Michael Carnes & David Graziano, and produced by Sony Pictures Television & Dark Horse Entertainment, Coyote will return and was last broadcasted on 2021-01-07.
IMDb Rating: N/A/10 Coyote Official page on CBS All AccessAll Seasons: 1 All Episodes: 6 Average Episode length: 50 minutes Seasons Season 1 - 2021-01-07 with 6 Episodes
House of the Dragon
The Watch
We use cookies to ensure that we give you the best experience on our website. If you continue to use this site we will assume that you are happy with it.Ok