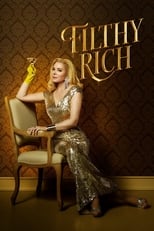 CreatorTate TaylorCastKim Cattrall, Melia Kreiling & Aubrey DollarNetwork FOX Air Date Sep 21st, 2020 When the patriarch of a mega-rich Southern family, famed for creating a wildly successful Christian television network, dies in a plane crash, his wife and family are stunned to learn that he fathered three illegitimate children, all of whom are written into his will, threatening their family name and fortune.

Where can you stream Filthy Rich?

On 2020-09-21 Drama TV Series Filthy Rich first aired on FOX. Written and created by Tate Taylor, and produced by 20th Century Fox Television & Imagine Television, Filthy Rich will return and was last broadcasted on 2020-11-30.
IMDb Rating: 7.1/10 Filthy Rich Official page on FOXAll Seasons: 1 All Episodes: 10 Average Episode length: 42 minutes Seasons Season 1 - 2020-09-21 with 10 Episodes
Imperio De Mentiras
I love you, Güero
We use cookies to ensure that we give you the best experience on our website. If you continue to use this site we will assume that you are happy with it.Ok