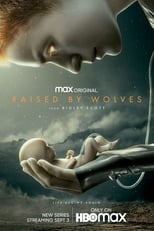 CreatorAaron GuzikowskiCastTravis Fimmel, Niamh Algar & Amanda CollinNetwork HBO Max Air Date Sep 3rd, 2020 Two androids are tasked with raising human children on a mysterious virgin planet. As the burgeoning colony of humans threatens to be torn apart by religious differences, the androids learn that controlling the beliefs of humans is a treacherous and difficult task.

Where can you stream Raised by Wolves? DVD/Bluray via Amazon