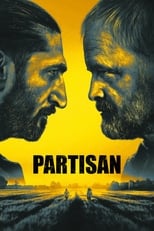 CreatorAmir ChamdinCastFares Fares, Johan Rheborg & Anna BjörkNetwork Viaplay Air Date Aug 16th, 2020 A man gets a new job in the idyllic surroundings of Jordnära, a gated community that runs a successful organic farm. But he quickly realizes that their rules and routines are somewhat unorthodox.

Where can you stream Partisan? DVD/Bluray via Amazon

On 2020-08-16 Drama/Crime TV Series Partisan first aired on Viaplay. Written and created by Amir Chamdin, and produced by Warner Bros. International Television Production Sverige, Partisan will return and was last broadcasted on 2020-09-06.
IMDb Rating: 5.4/10 Partisan Official page on ViaplayAll Seasons: 1 All Episodes: 5 Average Episode length: 44 minutes Seasons Season 1 - 2020-08-16 with 5 Episodes
Libertad
Biohackers
We use cookies to ensure that we give you the best experience on our website. If you continue to use this site we will assume that you are happy with it.Ok