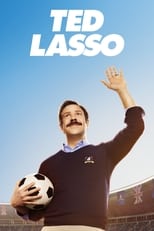 CreatorJason SudeikisCastJason Sudeikis, Hannah Waddingham & Juno TempleNetwork Apple TV+ Air Date Aug 14th, 2020 Ted Lasso is an American football coach who moves to England when he’s hired to manage a soccer team—despite having no experience. With cynical players and a doubtful town, will he get them to see the Ted Lasso Way?

Where can you stream Ted Lasso? DVD/Bluray via Amazon