Short Term 12 is a film about friendship, love, trust and how to help each other when one is in a desperate situation. You could fool yourself in believing that Short Term 12 is an independent drama, faithful to life through its depth studies of its characters and their relationships. But believe me, it’s just a cheap disguise to set your heart burning, a trick as old as the street. It is like Destin Daniel Cretton found a guide ‘Indie for dummies’ to conceive an indie-look to his films. Using steadicam, a superficial indie style soundtrack, a lot of ‘sincere’ dialogues and no special effects or action comforts people in a way that they feel special and alternative. What the spectator does not want to realize is that he or she is watching the same sentimental crap as before with just an updated packaging. The catchy title alone, makes his previous film I am not a Hipster (2012) highly attractive, especially now the so-called ‘hipster culture’ has spread mainstream, together off course with the refusal to be one.

Pseudo-indie films are the sickness of this century, especially because they deceive people in thinking to have good taste. Since Miramax’s indie company released Shakespeare in Love (Madden, 1998) and won an oscar with it, the Weinstein bros. have been bombarding us with superficially romantic gimmick films like She’s All That (Iscove, 1999), Garden State (Braff, 2004) and more recently Silver Linings Playbook (Russell, 2012). Those last two are both love stories about special lonely people defining the alternative personality everybody wants to identify with these days. And in a hour and a half they try to connect and succeed in finding their true ‘on another level’ romance, with some sweet indie rock in the background. At the other side, while sundance refuses too radically mumblecore films, they search for those safe indie formula’s in awfully empty films like Upstream Color (Carruth, 2013), which copies and surpasses Malick’s pretentiousness or the Beasts of the Southern Wild (Zeitlin, 2012), which is ridiculously overrated because of positive discrimination. It makes me a little bit afraid for this year’s Sundance winner Ryan Coogler’s Fruitvale Station (2013). Colin Trevorrow, known for a little indie sundance flick Safety Not Guaranteed (2012), is also going to direct the new Jurassic Park, named  Jurassic world. It seems like anybody could direct a indie feature or a blockbuster right now, as long as it’s financially profitable. Indie has just become another genre format.

So, what is the critically acclaimed Short Term 12 all about? We follow a couple of blank hipster supervisors who have a lot of fun at an orphanage/prison for children who get treated like juvenile delinquents. When these children succeed in escaping which means running out of the domain, the supervisors cannot touch them anymore, they will have to convince them with reason to come back. Off course, the place is full of emotionally unstable rebels. However as the story progresses we learn that they are as a matter of fact just plain vulnerable that just need some love and understanding, and doesn’t the public love that. The cliché one-dimensional portrayal that gets repeated in characters like Marcus (Keith Stanfield), beaten up by his mother but now benefiting from that by writing excellent raps, results in beautiful and touching scenes. Subsequently Jayden (Kaitlyn Dever) does an award-winning performance on being a cynical kid with a suicide history and hey, coincidentally our main character Grace (Brie Larson) had them damn suicide troubles as well so they connect. Some people simply just have those problems. Although everybody suffers from complicated emotions, finally and luckily we get rewarded with a ‘happily ever after’ Hollywood ending so we can just let the whole story behind us.

Wasn’t that a nice movie, honey? We have to do this more, don’t you think? 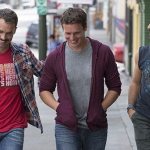