To end his ‘Depression Trilogy’, which also consists of his previous works Antichrist (2009) and Melancholia (2011) – all with a wonderful Charlotte Gainsbourg in a major role, von Trier came up with Nymphomaniac, exploring all the dark sides of our sexual life. A subject, so fascinating it turned out to be the sole basis of a 5 and a half hour long film. Unfortunately, he had to cut it to a more conventional 4 hours, making it possible for greedy distributors to release it in 2 parts of 2 hours. We, at this site, got the chance to see the 4 hour cut immediately, which is highly recommended in case you have this opportunity.

Lars von Trier, the genius behind masterpieces like Idioterne (1998) (the second Dogme 95 film after the much more critically acclaimed Festen (1998), by Thomas Vinterberg),  Dogville (2003) and Melancholia (2011), is not exactly known for his optimism, having rather cynical views on the goodness of human nature (‘le bon sauvage’) and authenticity of man. Not quite beyond comprehension, as he states Ingmar Bergman’s Through a Glass Darkly (1962) to be his absolute favorite film. But just as is the case with Bergman (think Smiles of a Summer Night (1955) ), it doesn’t always have to be gloomy with Von Trier too. Idioterne (1998) tends to be quite funny at times and with The Boss of It All (2006), the director even succeeded in making a full-blown comedy, but not totally without some social commentary and artistic pretensions, as it remains undoubtedly an ‘auteur’ film. Just as Nymphomaniac is another great example of von Trier pessimism, it’s also a really funny movie.

Despite being accused of being way too explicit, extremely pretentious and overly didactic, he stayed true to himself and his ideas, always trying to seek the unvisited boundaries of cinema and then passing them. Nymphomaniac  proves that notion. What we’re dealing with here is another milestone in cinema by Mr. von Trier.

As usually, von Trier questions the values and norms of our society not only to shock people but also to make them think. I believe it is our duty to doubt everything if we want to avoid being numb zombies living the imposed routine. With a subject like Nymphomaniac, he easily switches between big issues as love, sex and human relationships. Some people may say he does not reveal really new stuff but the mass remains thumb and it is good to repeatedly fight for some of those not yet accepted ideas about freedom in sex.

Our lives spin around love, every day we think about it and use it to justify people’s actions. This year, the Pet Shop Boys sang “Love is a bourgeois construct” and von Trier seems to agree. He questions this ancient fundament of society by making his protagonists revolutionize against it. “Vulva, mea maxima vulva!” shouts the nymphomaniac movement that just wants to have sex without strings attached. According to the main character, Joe, love is just lust with the addition of jealousy. It is hypocrite, greedy and selfish, it is saying yes when you want to say no. When a girl of the movement begins to see one of her male objects more than once, she changes her mind by defining love as the secret ingredient of sex. But as we see with the progression of the film, even polygamy cannot save the boredom of love. Joe eventually leaves her routine life with husband and child to pursue extreme experiences. She wants to live.

How to live your life? Civilization learned us to suppress our inner instincts. Von trier breaks out by expressing nobody is equal, everybody has their own particular sexual desires. Still, society forces us to walk an imposed ‘path of happiness’, if we fail, there is for instance therapy to rescue us. We have to marry the opposite sex, find a decent and legal job, buy a house, have children and die to be disposed in the local cemetery. “The 95% of pedophiles that do not harm children, deserve a medal” Charlotte Gainsbourg shouts to Stellan Skarsgård, a neutral listening figure, representing the public, dealing with Von Trier’s shocking truths.

However Charlotte Gainsbourg and Stacy Martin both portray Joe magnificently, the changing of actors for the characters Joe and Jerome (Shia LaBeouf and Michael Pas) can sometimes be quite confusing. Skarsgård nurses the bruised Joe, Gainsbourg after picking her up from the street. As an explanation, she tells him her whole life story, mostly portrayed by Stacy Martin. His character represents the audience that has to cope with her radical thoughts and experiences. He does that by searching for recognizable mathematical theories or practical metaphors in hobbies like fishing to justify her acts and put them into perspective. However appearing as seemingly random metaphorical links, I see it as a representation of our habit to analyze incomprehensible events by linking them to evident premises accepted as truths in our society.

That society seems to be one of hypocrisy and lies. We almost believe Skarsgard’s honesty with his earnest attention and comprehension but sadly, he does not exist. He lets everyone believe he is different and does not give a fuck about sex, he pretends to be the ultimate neutral listener. But everybody has his own interpretation of things, which is constructed through his own history of experiences. Skarsgard wears a mask through the film to put it off by the end, when he goes for losing his virginity on her. “Why not? She already fucked thousands of other men.” He changes to a perverted, frustrated old man. In a way, he represents us, as human beings, trying to differ intellectually from animals but in the end falling back on the same dirty (sub)conscious drifts.

We know that von Trier loves this kind of subject matter but too bad, he tends to recede to self-irony by forcing some situations into ridicule ones which I find rather annoying now and then. For example the incomprehensible discussion between negros with the prolonged focus on their big dicks. Another example is Uma Thurman’s performance which evolves from sad and realistic to absurd and caricatural, enforced by her hyperrealist model kids. It maybe gives some air to the heavy material Lars handles but all in all, he just loses credibility. Somehow it will become a reason to some spectators to laugh away important matters of life.

The film breaks with conventions, confronting the casual filmgoer in a sometimes hard and direct way. I hope people will take ‘crazy Lars’ seriously because this film handles some really important matters. For most, it will probably be difficult to see through the sex and shock factor of the movie, like it was with Spring Breakers. Lars tried to predict the reaction of the audience through Skarsgard’s act. For example, after a useless scene with a car on fire and a brilliant Talking Heads tune, a confused Skarsgard queries its relevance for the story. To which Gainsbourg replies you have to accept certain aspects of the story to enter it and to get the most out of it. That metafictional, postmodern response is actually aimed at us, the confused spectators of the film.

Another general message is that we expect too much of each other and life. Everyone wants to have some influence on other persons and tries to pervade their opinions on people. Just for their own sake of finding a meaning of existence. Let’s stop being so selfish all the time, we do not know anything. The only fact is that life is absurd, useless and before you know it is over. Let’s just all have fun and respect for each other’s choices and for god’s sake let’s not take life too seriously.

“Perhaps the only difference between me and other people is that I’ve always demanded more from the sunset. More spectacular colors when the sun hit the horizon. That’s perhaps my only sin.” (Joe) 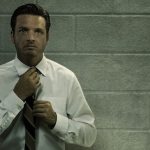