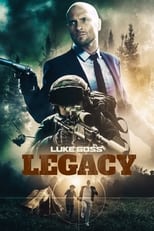 Director Michael Winnick CastLuke Goss, Elya Baskin & Roberto 'Sanz' SanchezRelease May 28th, 2020 While on a hunting trip in the isolated wilderness, a father and his adopted teenage son are turned into the prey of unknown assailants. They are unexpectedly joined in their fight for survival by a stranger who reveals the disturbing truth about the son's biological father, an international crime lord, and why that crime lord has sent trained assassins to kill the teenager.
Legacy is directed by Michael Winnick and was released on May 28th, 2020.

Where can you stream Legacy: Not yet streaming online DVD/Bluray via Amazon