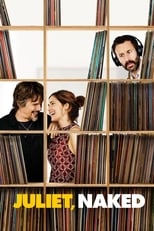 Director Jesse Peretz CastRose Byrne, Ethan Hawke & Chris O'DowdRelease Aug 17th, 2018 Synopsis Things are not going well between Annie and Duncan, two thirty-somethings living in a picturesque seaside town in England. Duncan is obsessed with Tucker Crow, a legendary rock musician who disappeared in the 1990’s. Fed up with Duncan’s childish adoration, Annie breaks up with him. Thing start to get strange however, when Annie, by mere accident, gets in touch with… Tucker Crow. A somewhat far-fetched plot doesn’t stop this romantic comedy from stealing your heart.
Juliet, Naked is directed by Jesse Peretz and was released on Aug 17th, 2018.

Where can you stream Juliet, Naked:

Stay up to date with the streaming options of Juliet, Naked & other streaming releases