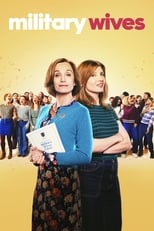 Director Peter Cattaneo CastSharon Horgan, Kristin Scott Thomas & Amy James-KellyRelease May 22nd, 2020 Inspired by global phenomenon of military wives choirs, the story celebrates a band of misfit women who form a choir on a military base. As unexpected bonds of friendship flourish, music and laughter transform their lives, helping each other to overcome their fears for loved ones in combat.
Military Wives is directed by Peter Cattaneo and was released on May 22nd, 2020.

Where can you stream Military Wives: Not yet streaming online