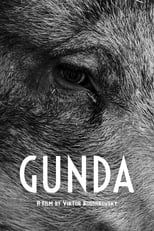 Director Viktor Kosakovskiy Cast, & Release Apr 16th, 2021 Experiential cinema in its purest form, GUNDA chronicles the unfiltered lives of a mother pig, a flock of chickens, and a herd of cows with masterful intimacy. Using stark, transcendent black and white cinematography and the farm's ambient soundtrack, Master director Victor Kossakowsky invites the audience to slow down and experience life as his subjects do, taking in their world with a magical...
Gunda is directed by Viktor Kosakovskiy and was released on Apr 16th, 2021.

Where can you stream Gunda: