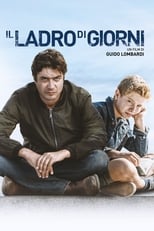 Director Guido Lombardi CastAugusto Zazzaro, Riccardo Scamarcio & Massimo PopolizioRelease Feb 6th, 2020 Salvo was five when his father Vincenzo was arrested, practically before his eyes. Seven years later Salvo lives with his uncles and his cousin a controlled and peaceful existence in the Turin area, but his father returns and claims his son for four days. Vincenzo has to carry an important load to Bari and brings Salvo (nomen est omen) with him as insurance: a child is better than a gun, he says,...
Il ladro di giorni is directed by Guido Lombardi and was released on Feb 6th, 2020.

Where can you stream Il ladro di giorni: Not yet streaming online