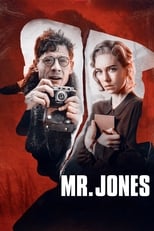 Director Agnieszka Holland CastJames Norton, Vanessa Kirby & Peter SarsgaardRelease Oct 25th, 2019 In 1933, Welsh journalist Gareth Jones travels to Ukraine, where he experiences the horrors of a famine. Everywhere he goes he meets henchmen of the Soviet secret service who are determined to prevent news about the catastrophe from getting out. Stalin’s forced collectivisation of agriculture has resulted in misery and ruin—the policy is tantamount to mass murder.
Mr. Jones is directed by Agnieszka Holland and was released on Oct 25th, 2019.

Where can you stream Mr. Jones: Not yet streaming online