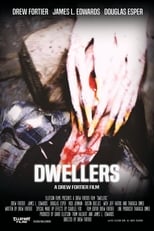 Director Drew Fortier CastDrew Fortier, James L. Edwards & Douglas EsperRelease Oct 12th, 2021 While shooting a documentary on the suspicious disappearances within the homeless community, a filmmaker and his crew go missing while uncovering a terrifying and vicious secret below the city's surface.
Dwellers is directed by Drew Fortier and was released on Oct 12th, 2021.

Where can you stream Dwellers: Not yet streaming online