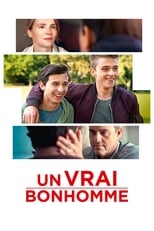 Director Benjamin Parent CastThomas Guy, Benjamin Voisin & Isabelle CarréRelease Jan 8th, 2020 Tom, 16, is a sensitive teenager who is about to enter a new high school after being expelled. He intends to find his place, make friends and seduce the girl he loves. Tom needs the support of his older brother, Leo, a true mentor, who is working to make him a “cool kid”. However, Leo's fraternal benevolence hides a destructive temperament... Will Tom be able to grow up finding his own path?
Un vrai bonhomme is directed by Benjamin Parent and was released on Jan 8th, 2020.

Where can you stream Un vrai bonhomme: Not yet streaming online