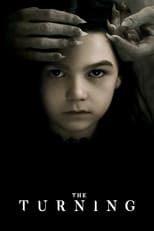 Director Floria Sigismondi CastMackenzie Davis, Finn Wolfhard & Brooklynn PrinceRelease Jan 24th, 2020 Synopsis From the screenplay of Cary W. Hayes and Chad Hayes, Floria Sigismondi directs the horror flick, The Turning. The supernatural horror film is topbilled by Mackenzie Davis, Finn Wolfhard, Brooklyn Prince, and Joely Richardson. Steven Spielberg joins the list of producers of the film. DreamWorks Pictures, Amblin Entertainment, and Vertigo Entertainment produced the film and is distributed by Universal Pictures. It should have been shown in February 2019 but it gave way to the release of the animation, How to Train Your Dragon: The Hidden World. It will start its US theatrical run on January 24, 2020. The Turning is directed by Floria Sigismondi and was released on Jan 24th, 2020.

Where can you stream The Turning: